Brazil picked up their first win at the FIFA World Cup in Qatar. The game against Serbia on Thursday, 24 November, ended 2-0.

After a lacklustre first half, the Brazilians found their game. They picked up the pace and pressed their opponents towards the goal. In the 60th minute, Alex Sandro took a powerful shot that hit the bar. It was a kind of warning: after about two minutes, the South American team took the lead. Neymar burst into the penalty area, handed the ball to Vinicius, who took a shot and Risharlison finished it off.

The same Risharlison scored the second goal and, according to experts, the most beautiful of the tournament. Vinicius passed the ball into the penalty area from the flank and Risharlison shot from the turn. The Serbian team could not really do anything against the Brazilians.

After defeating the Serbs, Brazil gained 3 points to move into first place in Group G, ahead of Switzerland (3 points). In the next round, Brazil will play Switzerland on November 28. Cameroon faces Serbia on the same day.

How to watch Cameroon vs Serbia Live Stream on TV

How to watch Spain vs Germany Live Stream on TV

How to watch Croatia vs Canada Live Stream on TV

How to watch Belgium vs Morocco Live Stream on TV 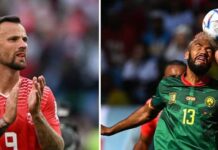